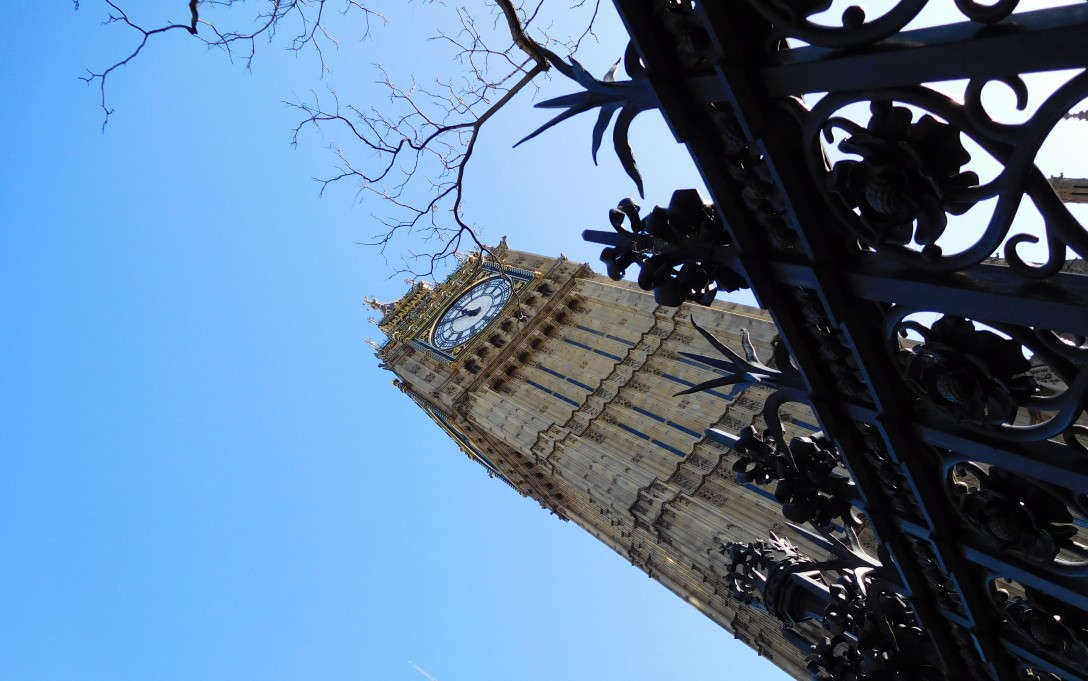 My flight landed an hour early, around 8:30 AM. When going through customs, the border patrol agent was making fun of my purple hair. But I feel that’s to be expected when you’re an American with obnoxious hair entering Europe. He, however, was kind and quite funny. Once I got through border patrol, I was able to go straight to the Underground and skip baggage claim. That’s the beauty of only bringing a backpack.

The Underground was insanely easy to navigate. I was expecting it to be a nightmare based on the stories from a friend who had visited last Spring. However, I found my route in minutes and the fare was only £6 to get to Buckingham Palace. I watched the beginning of the Changing of the Guard ceremony. However, I quickly grew uncomfortable being in the middle of a large crowd with the recent Christmas Market attack in Berlin. Instead, I took the opportunity of the tourist crowd being focused on the Palace to visit Big Ben, where there was much less traffic.

The walk from Buckingham Palace to Big Ben and Westminster Abbey was short and beautiful. Much of Birdcage Walk was lined with trees and old white buildings. As I had suspected, Parliament Square Garden was near empty. Despite the thousands of images I’d seen of that one famous clock in my lifetime, I was still shocked to actually stand in front of it. I did get a few dirty looks for stopping in my tracks (sorry, Londoners). While it was pretty magnificent up close, Big Ben and the Parliament building where even more beautiful from across the Thames. There was a nice walk just opposite the water that was quiet and empty.

Once across the river, I decided to stop for a rest and a coffee. I took some time to recharge and write. Just as I was getting ready to leave, two British teenage boys at the table next to me decided they wanted to make a game out of naming the US states. They wanted to see who could name the most. It was quite funny to listen to, so I stayed a bit longer. Their father was helping them and correcting them when necessary. They were enthusiastically naming off US cities from movies and shows they liked and trying to guess the state this way. I thought this was an interesting method. They were quite good too. I couldn’t help but chime  in when neither of them could remember whether or not New England was a state. The fact that they had been next to an American the whole time gave them a good laugh. Towards the  end, they simply began adding “New” to the beginning of English cities and asking if they were states. They were a funny and sweet family.

I left the café around noon to see the Globe Theatre. I had pulled up public transportation on my phone but ran into a bit of trouble trying to buy a bus ticket, so I decided to walk instead. In total, the walk took around 25 minutes and was light and relaxing. The streets were nice and empty and the weather was crisp.

The tour of the Globe was interesting. I had not realized it was not the original. In fact I had not realized how new it was at all. I learned that the first theatre burned down during a production of King Henry shortly before Shakespeare’s death. A second Globe Theatre was built years after his death but was again destroyed. The one that stands today was actually built in the 1990’s and has a few alterations to the original to meet London City building codes. (Makes sense given that the first two were destroyed!)

The theatre was just next to the Millennium Bridge, which was featured in the 6th Harry Potter film. (Death Eaters whip the bridge about and destroy it in the opening scene.) I couldn’t not walk across a bridge that had such a cool scene in the films! While I did do it, I was terrified the whole time. It could have been my fear of bridges or my fear of large bodies of water or even the fact that the Millennium Bridge is designed to move as you walk across it; but whatever it was, it gave me the shakes!

From the bridge, you have a spectacular view of St. Paul’s cathedral. Somehow, the stone was glowing almost gold in the sunlight! I was blown away by it’s beauty and the closer I got, the more in awe I was. I stopped for a rest in the gardens to just sit and admire it. However, once I had a moment to sit down, the exhaustion of over 24 hours of travel caught up to me. So I headed to Stansted a few hours early. On the train to the airport, I was seated next to three Italian men who were jumping back and forth between speaking Italian and German, so was able to catch bits if their conversation. This interaction made me realize that when traveling, I have a tendency not to speak so that people cannot tell where I’m from. I find this rather funny but I intend to work on this in the future.