My sister and I took a tour of Connemara and Cong on our seventh day in Ireland through the Galway Tour Company. It had come highly recommended by an American student who was working the reception desk at our hostel. In the past, I haven’t given much though to bus tours. However, I’m glad we took the guided tour rather than attempting to venture there ourselves, as I normally would. The tour was much more informational and extensive than anything we could have made for ourselves. 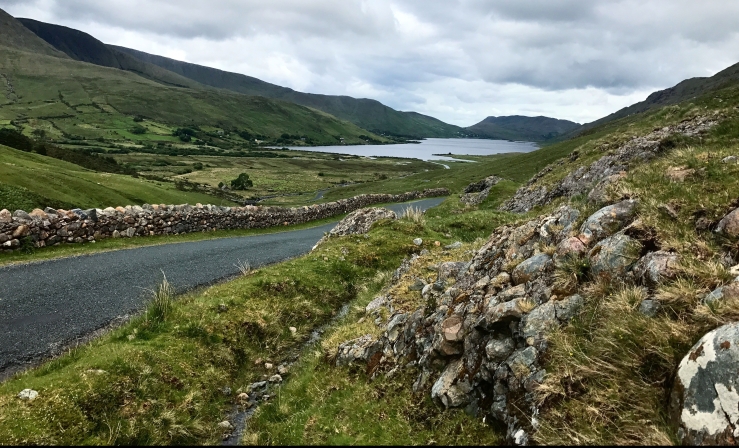 Yet, regardless of the tour, Connemara is without a doubt the most magical place I have been. The Irish west coast as a whole is glorious. The rolling hills and back-face sheep gave my heart joy like I’ve never experienced. I have had a love for the country long before ever visiting. I’ve spent hours looking through photos of Ireland and the Irish coasts, for many many years. But stepping on the bog and smelling the peet and coastal air was nothing like I had imagined. The earth was spongy beneath my feet and I could feel the energy of the place wrapping around me and flowing through me. It made the tips of my fingers tingle with each step, which sent fantasies of being absorbed by the hills through my mind. I just wanted to sit on the hillside overlooking Lough Na Fooey near the sheep for the rest of my days — drawing, writing fairy tales, and soaking up the clear air with my pup. But given that we were on a guided tour, my time on the hillside was limited. If it had not been, I may have never left those hills.

As we wove through the bog, we were graced with the histories of the area. Our guide and historian told us tales of settlement, the English Reformation, the Potato Famine, and the individual tales of places we visited.

Tenant Farming and the Walls of the Potato Famine 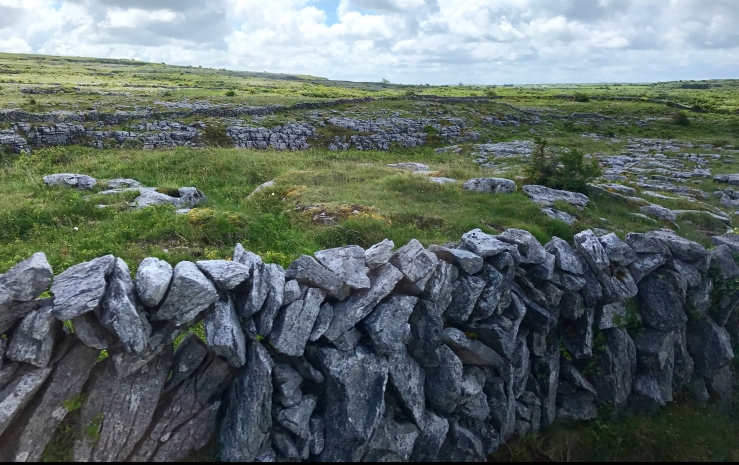 Throughout the journey, he pointed out the various walls that divided tenant farms, claiming that only about 20% of the walls standing today served an actual purpose during their construction. The rest were constructed during the Potato Famine, when the farms on the Irish west coast experienced a system that closely resembles wage slavery. Tenants  who worked the farms they lived on were only paid enough to cover the rent charged to them by their landlords. With all of their money going back to their landlords, many did not have the money to feed themselves. As a solution, rather than paying the tenants more for their work, the landlords paid the tenants to perform additional tasks. The primary task in this system was wall building. So these short, stacked walls popped up all over the Irish west coast as one of the only ways working class Irishmen were able to survive.

About halfway through the day, we stopped at Kylemore Abbey for an extended visit. Our guide told us quite a long tale of its construction. According to him, there was an Englishman of Irish heritage who upon marrying his wife came to Ireland and fell in love with the Connemara. He collected what he could and bought a small plot of land for them to build a home on. I cannot remember how or when, but at some point he came into quite a bit of money, with which he extended his existing plot into the vest landscape that it covers today and started building a 72 room manor for his beloved. However, after a vacation to the Egyptian Nile, his wife fell ill and eventually died of the fever. After her death, he no longer held interest in the home and left it to his children.

Then came a string of events, details of which I am not entirely certain, that ended with the great manor being purchased by an American businessman as a wedding gift for his daughter. She married a penniless English nobleman with a gambling problem. Though the businessman did not know of the Englishman’s lack of money or love of cards at the time of his marriage to his daughter. Once he learned of this, after his new son-in-law gambled away much of his money, he took the estate back from the couple and sold it to a group of nuns fleeing persecution. The nuns turned Kylemore into a school and an Abbey. It stands today as Kylemore Abbey, and though the school has been inactive for nearly 30 years, they are in the process of reopening their doors to students. 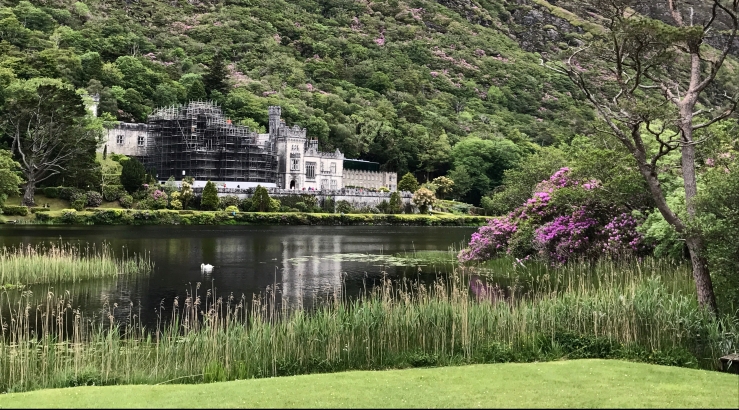 During our visit, the Abbey was undergoing construction to accommodate the coming influx of students, and was partially covered in scaffolding. While somewhat disappointed by this, I found it beautiful nonetheless, a scene out of a fairy tale. There were even lily pads and swans in the water! Though we didn’t spend much time in the Abbey itself, my sister and I spent around an hour exploring the walled Victorian gardens. Here we had the opportunity to see a fully bloomed Sea Holly thistle, an endangered European flower. I was much more excited about this than my sister, who was eager to get a bite in. 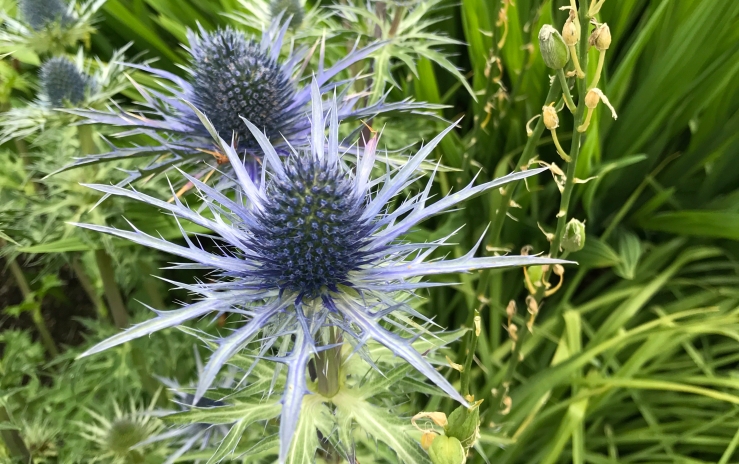 Before we left, we sat for a quick lunch at one of the restaurants on location and had, dare I say, the best potato soup either of us had ever consumed. It’s been months since we left Ireland and my sister and I still talk about this soup every chance we get. It’s rare for us to find a soup that we can both eat, that is vegetarian and gluten free. So, the fact that we were both crazy about this soup was a strange bonding moment for us. 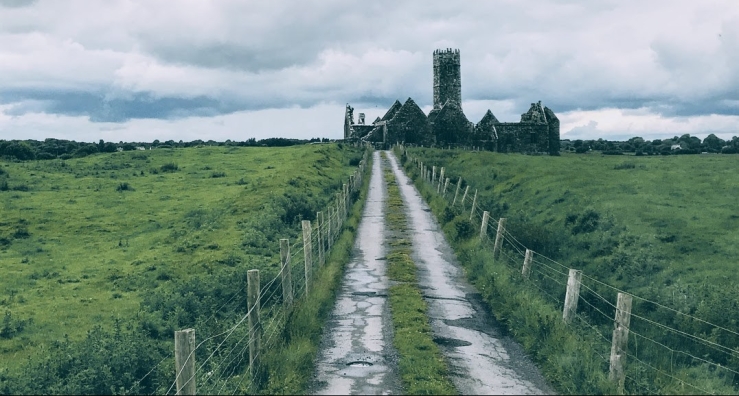 Ross Errilly Friary, a medieval monastery, destroyed, rebuilt, reformed, and destroyed many times was such a beautiful place with such a dark history. According to our guide, Ross Errilly Friary was built in the 15th century. Early in the 16th century, the Friary was occupied by the English during the Reformation. This stood as the first English occupation in a century long battle over the Friary. Our guide told us that the structure had been destroyed and rebuilt upwards of five times. It now acts as a makeshift graveyard for the community. 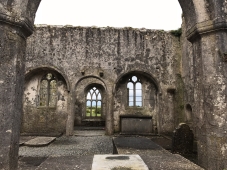 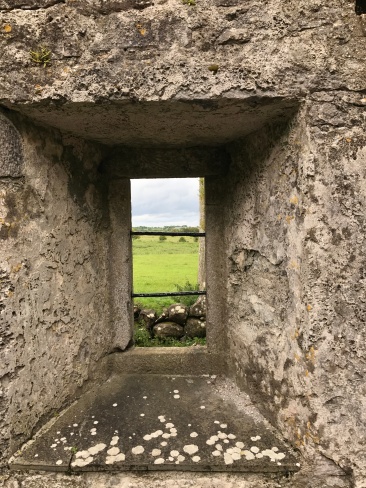 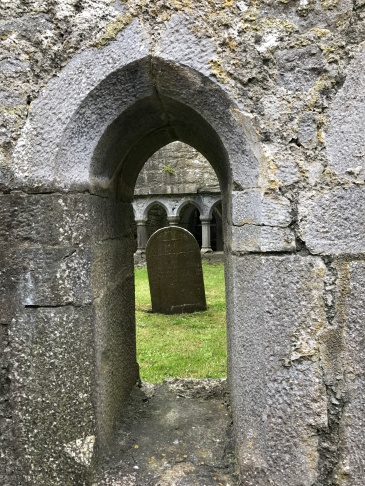 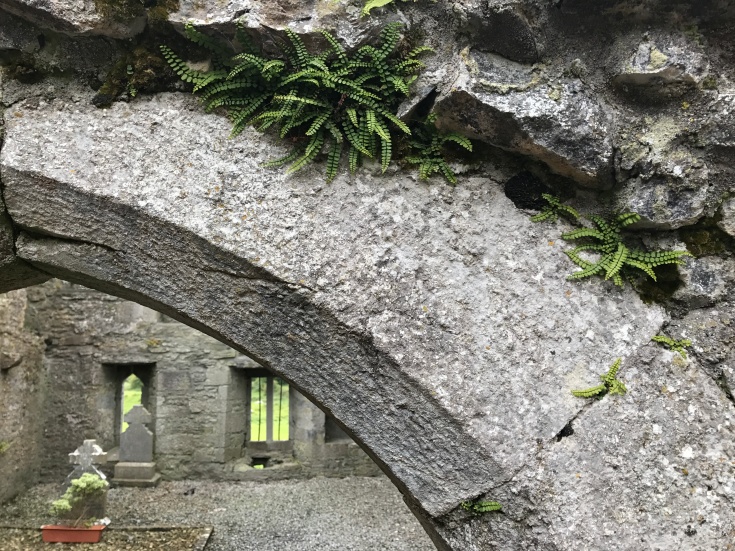 Overall, exploring Connemara was an overwhelmingly magical experience. I struggled to pull myself away from the bog, despite being exhausted from such a long and exciting day. Visiting Connemara and the Irish west coast is an opportunity I would recommend anyone and everyone take. This is a place that photos cannot possibly capture the full beauty of. No matter the quality, a photo cannot capture how it feels to stand on the bog, to smell the Atlantic and the invasive rhododendron, to feel the soft mist against your cheeks, and to listen to the sheep migrate through the hills.